Thujone is a fragrant, oily substance, naturally found in a variety of common plants and flowers. Thujone is perhaps best known in connection with absinthe, the drink that inspired a generation of nineteenth-century artists, writers and thinkers. In absinthe, thujone is thought to be the secret behind the unusual "mind-illuminating" effects (as one French doctor put it) of the special green liquor.

Thujone, however, turns up in all kinds of unexpected places.

Thujone takes its name from the thuja tree, whose bark contains the substance. Coriander, tansy and tarragon all contain moderate amounts of thujone, as do many other herbs and spices. Thujone is also found -- in fairly high concentrations -- in cedar leaf oil and Dalmatian sage oil. As a result, many everyday products contain some concentration of thujone, including Ralph Lauren's "Safari" fragrance and Vick's "Vaporub".

The alpha-thujone contained in absinthe comes from Artemisia absinthium, a wild plant commonly known as wormwood. An essential ingredient of the celebrated drink, wormwood perhaps is nature's richest source of thujone: by weight, wormwood oil typically contains over 40% of the substance.

Thujone is believed to trigger inexplicable transformations in the mind. For over two centuries, absinthe drinkers have reported perplexing shifts in sensory perception, as well as extreme clarity of thought and vast improvement in cognitive and creative abilities. It is unclear, however, why thujone affects the mind in this way, or even if thujone alone is responsible for these remarkable absinthe effects.

To this day, modern science has failed to provide any comprehensive answers, even though scientists had documented the effects of thujone by 1916. Recent research did confirm one thing: the alpha-thujone found in absinthe causes "CNS cholinergic receptor binding activity" in the brain, which, scientists claim, improves the brain's cognitive functions. This will come as no surprise to practitioners of natural medicine, who have long prescribed thujone-rich wormwood for the improvement of thinking and memory.

In extreme quantities, thujone is toxic and may cause hyperactivity, excitability, delirium, seizures or worse.

Absinthe drinkers needn't fear, however, as only a small amount of thujone actually survives the absinthe distillation process. No matter how much absinthe you might drink, the chances of a thujone-induced delirium remain nil -- you would suffer fatal alcohol poisoning long before that.

"In absinthe, the most toxic compound is the alcohol," confirmed biochemist Wilfred Arnold of the University of Kansas. "Absinthe generally contains less than ten parts [of thujone] per million," he continued.

Thujone poisoning is a possibility with home-made, undistilled "absinthes" though -- so beware those do-it-yourself absinthe recipes that suggest mixing wormwood oil with alcohol. At best, you will end up with a foul-tasting liquor that bears no resemblance to real absinthe. At worst, you will end up in a hospital. Wormwood oil, in its raw form, is a poison.

Visitors to this site have posted additional material on the topic of thujone. We especially like A different kind of Thujone... by Jamie on Mon, 8 Jan 2007 at 18:41.

Got something to say about thujone? 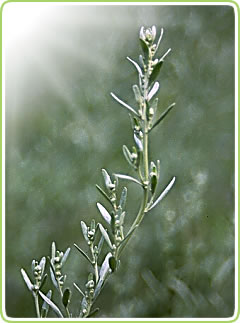 The Wikipedia entry on thujone gives an overview of the substance's chemical composition and pharmacology. Also includes a brief discussion of thujone content in absinthe (modern and pre-ban).

Vivienne Baillie Gerritsen, writing for the Swiss Institute of Bioinformatics in 2005, isn't too thrilled by the Green Fairy's comeback. A scientific analysis of the effect of thujone, or a modern-day anti-absinthe rant? You decide.

Should you care to know that the substance's formal chemical name is "1-isopropyl-4-methylbicyclo[3.1.0] hexan-3-one", then the geeky 3Dchem's interactive 3-D model of the thujone molecule is a toy you'll like. Unfortunately, the associated article contains quite a few factual errors.