The effects of absinthe

The clear-headed form of inebriation -- so odd for a drink that typically contains between 50 and 70 per cent of alcohol -- never fails to surprise those who reach for a glass for the first time:

"People always remark how odd it is," says Dan, a Manchester party host. "They expect to feel drunk as they would on any other spirit, but it doesn't quite work in the usual way with absinthe. Somehow, absinthe just has a different effect on people. Maybe it is a kind of drunkenness, but it's a weird kind of drunkenness, with this bizarre clarity of thought that comes with it."

Arthur Rimbaud, the famous French poet, sipped the green drink to liberate the "sacred thing" (his mind) as he daydreamed "voyages of discovery that nobody had heard of" and "every kind of magic". Ernest Hemmingway called absinthe "brain-warming, idea-changing liquid alchemy". Many other artists and writers regularly enjoyed the company of the Green Fairy (the drink's affectionate nickname) in search of inspiration.

But you don't have to be a great poet to experience absinthe's inexplicable, consciousness-shifting effects. Gary Fuller, a successful London lawyer and a avid absinthe fan, described what the Green Fairy does for him:

"It is as if you are here, but, at the same time, your mind also enters some other, higher level of awareness. Suddenly, you gain the capacity to observe and understand reality from another perspective. It is as if you have tapped into some strange but wonderful source of information, understanding and creativity. Your mind is crystal clear, your perception is enhanced, rich creative powers unlocked. Ideas, answers, solutions and inspiration rush towards you from all directions."

Drinking absinthe, it seems, does have the perplexing effect of "illuminating the mind", as one French doctor put when writing, in 1872, of the transformations the mind undergoes under the Green Fairy's influence. The doctor was especially intrigued by the odd absinthe phenomenon of enhancement in sensory perception. Rather than dulling one's senses, as would be expected from a drink so high in alcohol, absinthe has the opposite effect. The doctor wrote:

"The most curious thing about the transformation of the sensorial apparatus -- the phenomenon, at least, that struck me most forcibly in the experiments I conducted on myself -- is that all sensations are perceived by all senses at once. My own impression is that I am breathing sounds and hearing colours, that scents produce a sensation of lightness or of weight, roughness or smoothness, as if I were touching them with my fingers."

It is generally believed that thujone -- the substance naturally present in the wormwood plant from which absinthe is made -- is largely responsible for the remarkable effects of the drink. Precisely how thujone produces such effects, however, remains a mystery.

Some claim that thujone compels the mind to enter a different level of awareness. In this state, apparently, the mind is able to connect with some sort of universal consciousness or intelligence from which it then draws its enhanced abilities.

Others stop short of making a connection with the supernatural. In their view, we don't tap into any mystical source, we just tap into a rich subconscious source that is hidden deep within each of us, a source that our usual conscious self cannot easily access otherwise.

The thujone in absinthe, it is thought, removes the blocks that normally prevent the mind -- and the senses -- from working at full capacity. Essentially, absinthe gives the mind the green light to be completely free, at least for a time. In this state, the usually docile subconscious mind is awaken and begins to work in tandem with our conscious awareness -- hence the perception of reality on two different levels. Our creative, cognitive and perceptive abilities reach new heights as a result.

Modern science has also tried to explain the unusual effects of the absinthe drink. Under the title "Absinthe Makes Neurons Run Wild", Corinna Wu, writing for the Science News magazine, described research in 2000 into the effects of the wormwood herb on the human brain.

Conducted by researchers at the University of California, Berkeley and Northwestern University Medical School in Chicago, the study has found that wormwood -- as well as other ingredients in absinthe -- cause "CNS cholinergic receptor binding activity". This, according to scientists, has the effect of improving cognitive functions of the brain.

Visitors to this site have posted additional material on the topic of absinthe effects. We especially like Green Fairy (my experience) by Thom on Sat, 12 May 2007 at 16:03, as well as Century Absinthe Review by Matt Summers on Mon, 7 May 2012 at 10:36.

Got something to say about absinthe effects?

53 people have
posted messages
to this page. 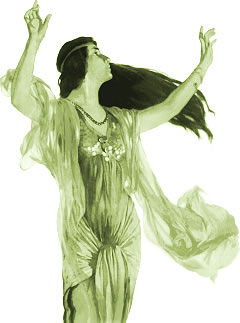 'Meeting the Green Goddess' is one metaphor used to describe the unusual mind-opening effects of absinthe.